Although there was a distinct chill in the air, there was a great turnout of people enjoying the park and our music. John Coles park was a cheerful place with people playing fetch with dogs, flying kites, cycling around the bandstand and sitting on benches enjoying ice cream. Whilst it was rather windy the potential rain held off and we had a brilliant concert to end the summer bandstand season at Chippenham.

We played several marches “Barnyard Castle”, “Musket, Fife and Drum” and “Blaze Away” which are always well received. We also played medleys of familiar tunes including “Beach Boys” and “Viva Italia”, some swing pieces such as “Cheek to Cheek” and songs to dance by – with our own conductor going off-stage to dance to “Rock Around the Clock”. I wasn’t certain if anyone joined in with the motions for “Loco-Motion” and the YMCA part of “Disco Lives” but I heard a few sing along to “Tequila”! Some film music made it to the mix including “Toy Story 2” and “Pirates of the Caribbean”. 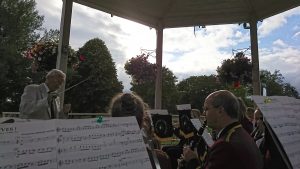