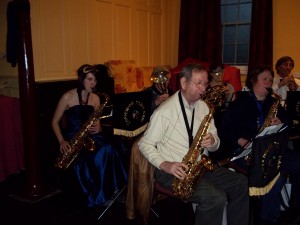 This was a rather unusual, private event for the band – a birthday party for one of the band members! Hence the non-uniform attire. The event was hosted in The Cause, Chippenham – brilliant space for the overall 61 attendees and highly convenient for the band as we rehearse there! Some band members wore the most fantastic masks for the occassion, and quite a few stayed on for more of the party (parlour and board games) after we finished the hour long set.

All the music was requested by the birthday girl, with many cheerful songs well received by friends. Two were even recruited to sing along with the Teddy Bears Picnic!