Thankfully the rain held out until after our set, playing on the Village Green among the various stalls. A delightful afternoon was had by all! 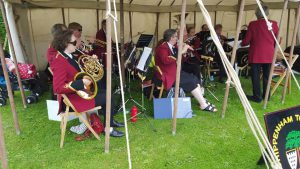 Devizes Wharf at the finish line of the Alzheimers Support sponsored walk (from Bradford on Avon to Devizes.)

Today saw a more unusual location for a band concert; by Devizes Wharf. The Alzheimers Support charity had setup two marquees for us, close to the finish line of a sponsored walk. We played whilst the courageous people arrived, having completed either an 11 mile (from the Bradford on Avon Tithe Barn) or a 3.5 mile (from Seend Cleeve) charity walk, gaining funds for Alzheimers Support.

Unfortunately for a June day, the weather was humid and even had some rain in the early afternoon but that did not deter spirits. We played apt songs for the event including “A Bridge Too Far”,  “Music to Watch Girls By”, “Locomotion” and “My Way”. The drummer excelled at Hawaii-5-0 and the trombonist performed both solo pieces: “Mondo Glissando” and “Basin Street Blues” brilliantly (although we considered alternative names for Basin Street Blues such as Canal Street Blues!)

There was an unexpected group of Morris dancers; instead of creating a battle of the bands we came to a peaceful compromise of extending our interval so that they could perform unhindered. The routines were fun to watch – it’s amazing how much energy they had!

Our conductor, Alan Horner, was interviewed about Chippenham Town Band.

We are definitely looking for more wind / brass / percussion musicians to join our fun! Rehearsals are each Monday evening (except for bank holidays and December).