Our marquee was filled to bursting as there was a brilliant turn-out of band members; so much so that the poor souls at the edges were drenched by the sporadic downpours of rain! This did not succeed in dampening spirits, as many rousing tunes were played. The bagpipe player even collaborated on Highland Cathedral, creating our best (if rather loud) sound yet.

Of course the Red Arrows flew past to the tune of “Those Magnificent Men in their Flying Machines!”

On Sunday 3rd June we accompanied hymns in the Lacock Church during the special Jubilee service, as well as playing a few more entertaining pieces whilst the congregation (and tourists) enjoyed tea and biscuits. It was rather unusual for us to play with singers (other than carols) but went splendidly – with only a slight discrepancy as to the length of one hymn.. 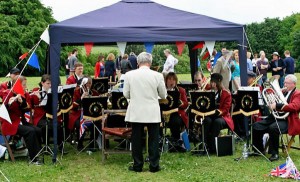 On Monday 4th June we played at the rather grand Kington St Michael Jubilee event! We had a whole marquee to ourselves, if precariously close to the Tug of War rope. We played for two sets of quite a variety of pieces and enjoyed a Cream Tea in the larger marquee. There were several interesting stalls and tournaments around – in particular the Boules tournament taking place on a slight slope!