More Carols in the foyer of the superstore……

Christmas Carols, with Singers from the local Churches, by the Christmas Tree. 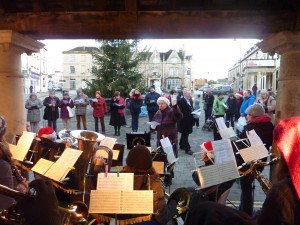 Carolling near the Christmas Tree, 2011

On Saturday we joined a heroic troop of singers and the Mayor; we stood beneath the Buttercross with the singers spread out in a big arc towards the lit Christmas tree. Many carols were sung until we were all Hark, Ding-Dong and Jingle Bell’d out. It had been a rather chilly evening, all in all! According to onlookers, the lighting looked spectacular as night fell – light glittering off our shiny instruments!

There were several street entertainers – one with snow who also sang most enthusiastically (borrowing a hobby horse prop for the Rudolph song!) The other (a little further away) played with fire! Credit to Andrew who, unable to play, still supported us with singing.

On Sunday we played our last event of the year – again in the foyer of Morrison’s. Silly hats were the norm amongst our motley crew and we played for nearly 2 hours. One group passed by in fancy dress, and danced a little to Rudolph – which happened to be the most requested song of the day.

I’d like to think that we added a little festive spirit to the slightly panicked last minute shoppers!

At both of these events, money was collected towards our local charity of the season: Alzheimer’s Society.

We played various Christmas tunes and carols – with lots of participation from the entire audience. There was a very large turn out by the band, including Alan joining our ranks as Jane conducted. There was even a novel way of singing 12 Days of Christmas: each table had its’ own props according to which day they were to sing! The lucky 12th day drummers hardly stood up at all.

A good spread of silly hats was on show, too!

Christmas Carols, in the foyer of the superstore,  Morrisons,  Cepen Park North,  Chippenham.

On Saturday we withstood the cold (luckily no wind) outside the Neeld Hall on the High Street for over two hours of jolly carols, amidst the market stalls. Many shoppers passed by, and (from the sounds of the tub) donated generously towards our charity of the season: Alzheimer’s Society. One bystander listened avidly for almost the entire session, so chose our penultimate tune, before our traditional finale “We wish you a Merry Christmas.”

Sunday saw a larger group of us play (under cover) at Morrison’s, again for a good two hours! Shoppers seemed delighted with the music with no less than seven compliments within the first hour. It seems like the charity collection was successful too.

Thanks to all those who carried buckets! Particularly Mike with his singing. He took the above photo on our behalf.

Christmas Carols in the Town Centre,  hopefully without snow!